Get New Posts via Email

First Blood was about how I miraculously got over 5 years of procrastination planning, put up this blog and turned over a new leaf. What I didn’t mention is how it was part of a challenge I had with my doppelganger: Adim Ofunne.

There’s a proverb I heard growing up that I never quite appreciated. The child of the cobbler has no shoes. It doesn’t even sound like a proverb so I don’t feel guilty for not getting it right away. The wisdom tucked into that proverb is that when an individual is paid for a service, it’s unlikely they’ll perform it for free. I don’t believe its because they are cold-hearted. It’s in a parent’s best interest to provide shoes for their child, after all. I like to believe that when surrounded by their tools and placed in their work environment, most professionals will rather do paid work even if the free job is in their best interest.

Adim and I build websites of varying complexities for a living. Setting up a blog is hardly a test of our technical competence. We aren’t strangers to the importance of writing because a suprisingly significant percent of our jobs is keeping up with our field by reading other people’s blogs. We can set up a blog quickly and we know it’s important to blog. We can do it and we want to, but we never did. We were the cobblers who somehow never made shoes for our thoughts to wear while they traveled the internet.

How did we overcome years of planning and get our blogs set up within a few days of each other? We challenged ourselves.

@akamaozu Yes we should we need to get our asses in gear. I already have 4 topics down and I have started the design of my site and blog FYI

As I read his first post, Child like thoughts, I realized that it was fear that was keeping us from doing it. Scared of what people will think of a Software Engineer with a so-so looking blog. Scared that what we’ve written won’t be anywhere near as impactful as the awesome content the internet is already filled with. Scared that it won’t turn out as planned. Somehow the friendly challenge made us forget all that and press on. The challenge got us where skill, desire or foreseeable benefit didn’t.

My girlfriend says I’m always ready to accept a challenge. I don’t know if that’s entirely true, but I have found great success in posing a challenge to myself and trying my best to accomplish it. Some of them are pretty ridiculous, in retrospect.

I challenged myself to walk to work one day. I was pleasantly surprised when I did it and challenged myself to continue doing it. What I didn’t know at the time was that it’s roughly 4.5km one way. Just found out a few minutes ago when I pulled up the route on Google Maps. I walk 4.5km a day (9 if I’m feeling up to it) and it all started with a personal challenge.

I challenged myself to learn Japanese. I’m still woeful at it and need all the help in the world, but I can identify most hiragana, some katakana and a handful of kanji. Stringing together a sentence is beyond my capabilities, but I’m not backing down.

I challenged myself to live off ramen for a month. That was a really stupid challenge. I lost a whole ton of weight and looked really sickly but I completed it! I’m challenging myself never to mess with having proper meals and eating well ever again. Please God, don’t ever let me fail at this.

Challenges are awesome! You’re capable of so much more than you know, but you won’t know til you push yourself. Do yourself a favor and take a page from Barney Stinson’s playbook: challenge yourself today.

When I start writing code, the message I attach to the first save is FIRST BLOOD. Every. Single. Time.

The phrase comes from a sound-file built into a number of competitive online games that is played the very first time a player has been eliminated this round.

The attached note the first time I used the phrase in my code is:

Extracted from YKNightlights and retrofitted for general purpose usage

YKNightlights was a lifestyle blog I worked on for a friend and his buddies back in 2012. It was a pretty ambitious project on both our parts. The layout was very custom.  To build something that complex, I pushed my knowledge of WordPress, PHP and Javascript to the limit. The closest thing I’ve seen to it since then is Life+Times. I’ll take that as big plus since I like Jay-Z. 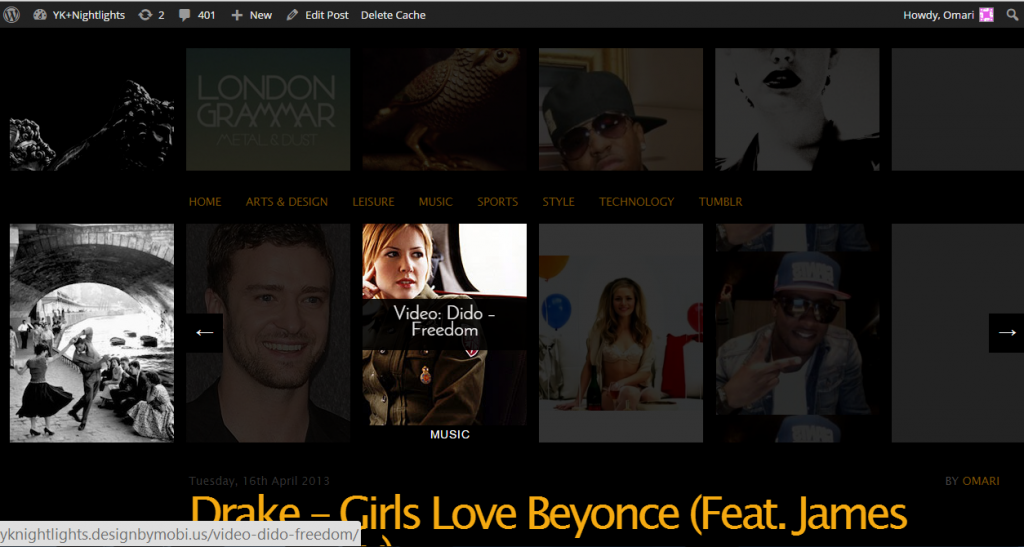 We worked really hard to deliver a unique experience. Keyboard arrow keys were scripted for easier browsing. Left and right to tab through the picture grid that served as content navigation. Up and down to jump between header, navigation and content. 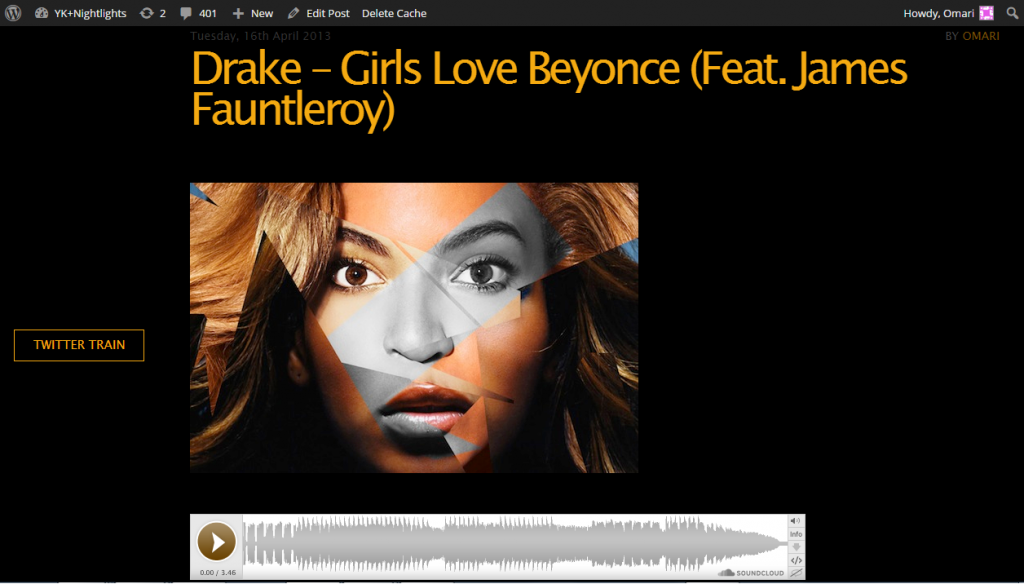 If the link you visited had content on it, the browser jumped directly to it. We had fun working on it, injecting our humor into it. Like what happens when there’s no search result to display.

Not only was the front-end custom, the back-end was too. I wanted to make it easy for them to run the site, so I designed and implemented panels that didn’t come with WordPress just to make it happen. 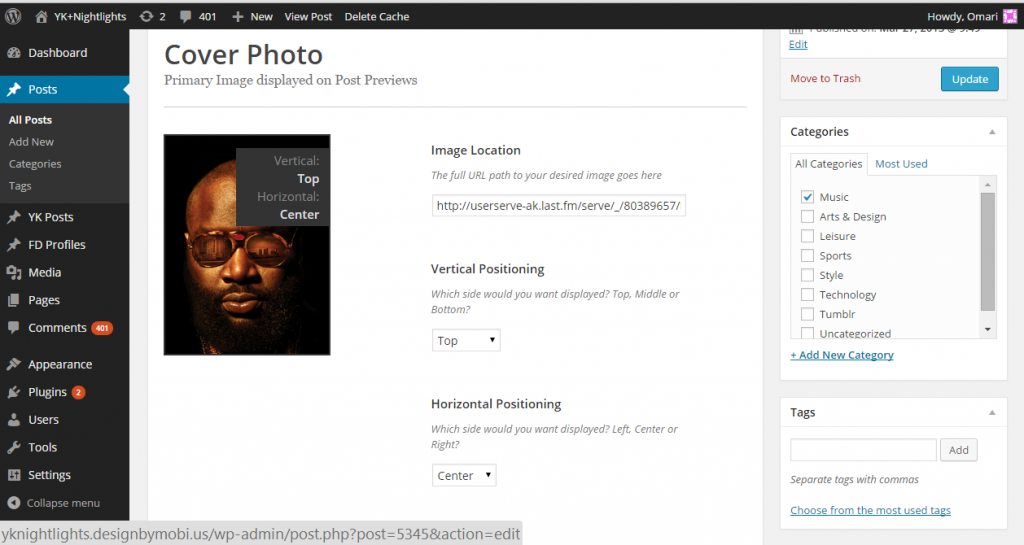 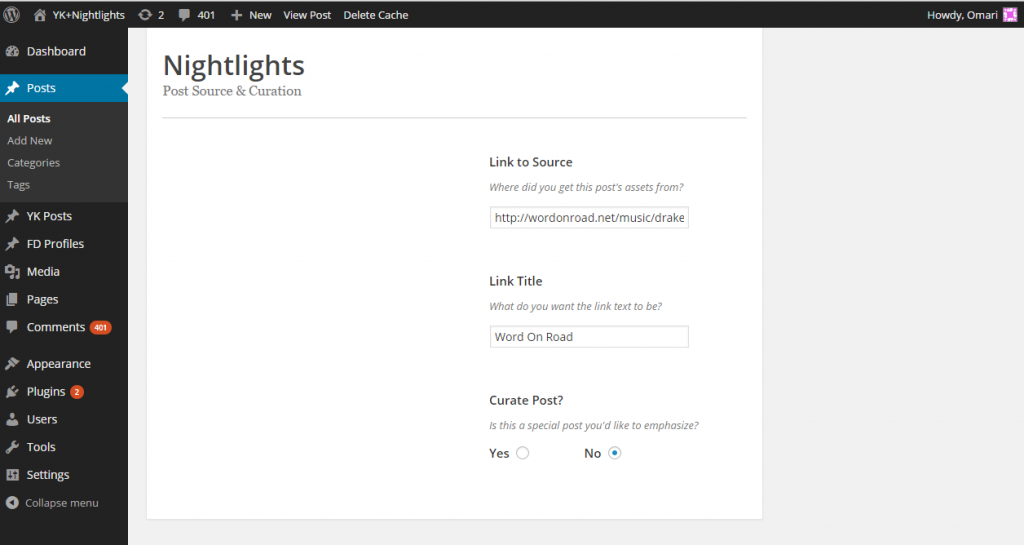 The more I did freelance work in WordPress, the more I needed to make custom control panels for clients. I got tired of having to jump into the project to get that bit of code or remember which project has the most updated version of it, so I extracted it from YKNightlights and retrofitted it for general purpose usage.

That piece of code became my first open-source contribution and I was really excited to publish and update it. I’m probably the only one that uses it, but I’ve kept it up-to-date to the best of my ability. I use it religiously when I have to customize a WordPress backend. Not because it’s perfect. It’s never been and probably never will be. I use it because it’s in public space and it’s now my job to keep it in ship shape for whoever happens to find it and use it.

In a way, it’s the perfect metaphor for this blog.

I’ve always wanted to have a blog. I’m a designer and a developer, so I always wanted something unique that showcased that so I planned accordingly. Somehow I’ve spent the last 5+ years planning, sketching, conceptualizing, daydreaming and I’ve never gotten around to it. Until now.

I bit the bullet and threw up a WordPress installation, didn’t even switch the default theme and just started writing. I’ll design it later. I’ll make beautiful illustrations for the site later. I’ll code up some amazingness some other day. Not today though.

Today is the day I draw First Blood on my own corner of the internet.

I’ve downed my first opponent in the battle for my own beautiful corner of the internet, but there are many tougher challenges to surmount than just starting. I’ll draw inspiration from my time working on YKNightlights and push with every fiber of my being to make this space exactly what I want. I may never succeed but heaven, earth and hell will know I never gave up.